When world-class artists come together in the intimate Alice Busch Opera Theater, magic happens. Join us at our lakeside theater for innovative productions of opera and musical theater.

The Festival attracts an international audience to the scenic Cooperstown area for an experience that’s unique in the realm of opera. The talent of singers, directors, designers and staff from around the world converges in the intimacy of the Alice Busch Opera Theater to produce world-class opera and music theater. 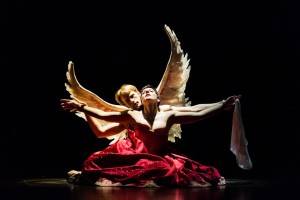 The Crucible
“You’ve made this place a court of Hell that twists at your beck and call.” Arthur Miller’s chilling dramatization of the Salem Witch Trials, an allegory of McCarthyism, is the basis for Robert Ward’s Pulitzer Prize-winning opera.

Saturday, July 16, 8:00pm
Monday, July 25, 1:30pm
Sold out! There are no tickets available.
Friday, July 29, 7:30pm
Sunday, August 7, 1:30pm
Sold out! There are no tickets available.
Friday, August 12, 7:30pm
Tuesday, August 16, 1:30pm
Saturday, August 20, 8:00pm
Thursday, August 25, 7:30pm
An Afternoon of American Song with Deborah Voigt
Inaugural Artist in Residence Deborah Voigt, joined by members of the Young Artists Program, presents arias and ensembles by Sondheim, Weill and others. Friday, August 5, 4:30pm
At This Moment: Jay Hunter Morris
Jay Hunter Morris, 2016 Artist in Residence, shares some of his musical inspirations — guitar, jazz, Wagner, Puccini and more, plus a few tales from the operatic trail. Sunday, August 7, 5:00pm
Christine Goerke Master Class
2014 Artist in Residence Christine Goerke presents a public master class with members of the Young Artists Program. Sunday, July 31, 4:30pm
Close-Up on The Crucible with Eric Schneiderman and Faith Gay
To coincide with the opening of the new production of The Crucible, New York State Attorney General Eric Schneiderman, Faith Gay and guests discuss the Salem witch trials, the “Red Scare” that inspired Arthur Miller’s theatrical depiction in The Crucible, and other “trial by fire” moments in American history.  Saturday, July 23, 4:00pm
Jamie Barton in Concert
Jamie Barton, winner of the Richard Tucker Award (2015) and Cardiff Singer of the World (2013), performs a selection of art songs followed by a presentation of Bon Appétit!, Lee Hoiby’s one-woman opera inspired by Julia Child. Friday, August 12, 4:30pm
2016 Justice Ruth Bader Ginsburg
Back by popular demand, Supreme Court Justice Ruth Bader Ginsburg continues to delight Glimmerglass audiences by sharing her passion for opera and her perspective on law in the arts. The program features a lively balance of performance and commentary, with members of the Young Artists Program enacting selected scenes that deal with law and justice, followed by Justice Ginsburg’s engaging insights. Order your tickets early for this sell-out event.

Friday, August 26, 3:00pm
2016 Stephen Sondheim in Conversation with Jamie Bernstein
The award-winning composer of Sweeney Todd joins Jamie Bernstein for a special conversation about his work and life in the theater.Saturday, July 30, 5:00pm

The Lounge: All Access Pass
2016 The Lounge: Blacklist
Arthur Miller wrote The Crucible in response to the effects of the “Red Scare” on America’s artistic community. This wasn’t the first time — or the last — a government felt threatened by its creative citizenry. Blacklist introduces some of the works and personalities that have provoked the authorities, from Beaumarchais to Bernstein.

Saturday, June 11, 5:00pm
Tuesday, August 2, 4:30pm
Monday, August 8, 4:30pm
The Lounge: Bohemians Onstage, Bohème(s) to Rent
Like Puccini, Ruggero Leoncavallo was inspired to write an opera based on Murger’s portrait of the artistic life. This program presents selections from Leoncavallo’s opera, along with other operas and musicals that center around working artists.

Sunday, June 26, 5:00pm
Monday, August 15, 5:00pm
2016 The Lounge: For the Birds
Are magpies really larcenous? Just how romantic is the turtledove? This program considers the facts of bird behavior alongside avian representations in art, music and literature.

The Lounge: Four Show Pass
The Lounge: Lost Luggage
In Rossini’s sparkling one-act comedy, an inadvertent luggage exchange sets in motion a madcap chain of theft and deception — all in the service of love.

Monday, July 25, 5:00pm
Wilde Tales
Wilde Tales is a new youth opera by Laura Karpman and Kelley Rourke that weaves together two engaging fairy tales by Oscar Wilde. The Remarkable Rocket shows how one fiery fellow’s arrogance is tamed; The Happy Prince is a story of selfless devotion. By turns touching and hilarious, Wilde Tales is a story of finding beauty where you least expect it. Performed at the intimate barn theater at the Cooperstown Theatre Festival just south of Glimmerglass, it features the Glimmerglass Youth Chorus and members of the Young Artists Program.

The commissioning of Laura Karpman for Wilde Tales received funding from OPERA America’s Opera Grants for Female Composers program, supported by the Virginia B. Toulmin Foundation.