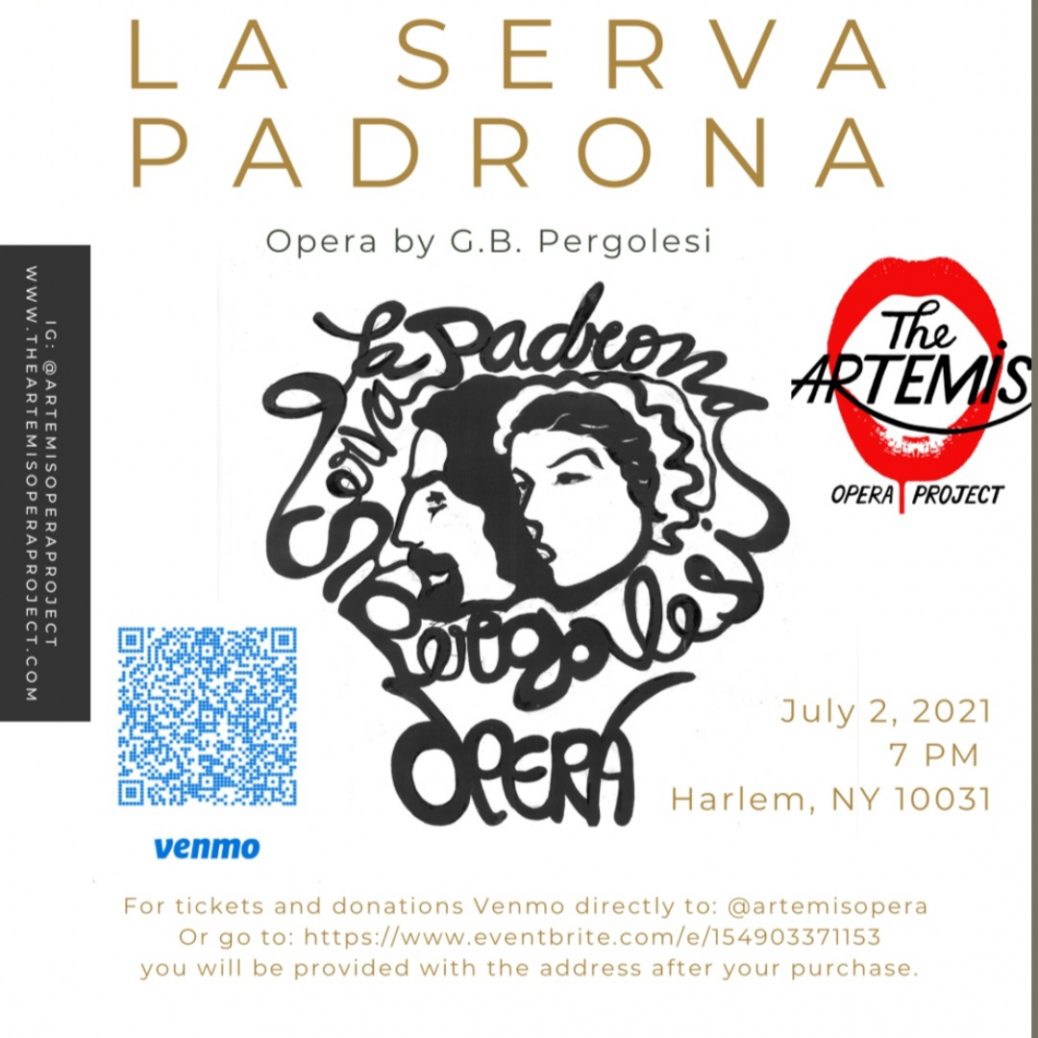 The maid turned mistress! A short comedy by G.B. Pergolesi.

“Serpina” is “Uberto’s” maid, but she refuses to be seen as one. Together with “Vespone”, the other servant , she will convince “Uberto” to give her her place as the Mistress of the house.

For or more information about other performers:

This will be a modern little production and we count with a projector that will display the subtitles. It’s at a private garden in Harlem, small but beautiful and cozy and most important we will have the pleasure to enjoy music. It is also a “bring your own wine” type of event, we want the audience to have fun!

La serva padrona, or The Maid Turned Mistress, is a 1733 intermezzo by Giovanni Battista Pergolesi (1710–1736) to a libretto by Gennaro Federico, after the playby Jacopo Angello Nelli. It is some 40 minutes long, in two parts without overture, and was written as light-hearted staged entertainment between the acts of Pergolesi’s serious opera Il prigionier superbo. More specifically each of the two parts, set in the same dressing room, played during an intermission of the three-act opera to amuse people who remained in their seats.

Federico’s libretto was also set by Giovanni Paisiello, in 1781.

La serva padrona and the opera seria it punctuates were premiered at the Teatro San Bartolomeo on 5 September 1733, the first performances there after an earthquake the previous year in Naples had closed all theatres. Both were written for the birthday of Holy Roman Empress Elisabeth Christine of Brunswick-Wolfenbüttel a few days earlier.[1]

Il prigioniero superbo was unsuccessful in its day[2]but has been staged in the composer’s home town of Jesi several times and recorded there in 1997, 1998 and 2009, being filmed during the latter year. But La serva padrona was an immediate hit and became its own stand-alone work. Audiences found it appealing for its relatable characters: wily maid versus aging master. More significantly it became a model for the opera buffa genre and a quintessential piece bridging the Baroque and the Classical periods. With a new finale its French version provided the catalyst for the infamous Querelle des Bouffons.

Uberto, an elderly bachelor, is angry and impatient with his maidservant, Serpina, because she has not brought him his chocolate today. Serpina has become so arrogant that she thinks she is the mistress of the household. Indeed, when Uberto calls for his hat, wig and coat, Serpina forbids him from leaving the house, adding that from then on he will have to obey her orders. Uberto thereupon orders Vespone to find him a woman to marry so that he can rid himself of Serpina.

Serpina convinces Vespone to trick Uberto into marrying her. She informs Uberto that she is to marry a military man named Tempesta. She will be leaving his home and apologizes for her behavior. Vespone, disguised as Tempesta, arrives and, without saying a word, demands 4,000 crowns for a dowry. Uberto refuses to pay such a sum. Tempesta threatens him to either pay the dowry or marry the girl himself. Uberto agrees to marry Serpina. Serpina and Vespone reveal their trick; but Uberto realizes that he has loved the girl all along. They will marry after all; and Serpina will now be the true mistress of the household.

(†It later became customary to replace this final duet with another: Per te ho io nel core. This the composer wrote two years later, in 1735, for his commedia per musica, Il Flaminio.)

The scores of the opera vary. Edwin F. Kalmus has one with massive omissions, wrong notes, and much spoken dialogue. Boosey & Hawkes has the score in an operetta adaptation by Seymour Barab, with highly simplified accompaniment and much spoken dialogue. Casa Ricordi presents the opera as sung through; it is the version most used. W. W. Norton & Companyincludes excerpts of the full score (for strings and continuo) that have numerous melodic differences from the Ricordi edition but correlate with the recording with Siegmund Nimsgern.[4]