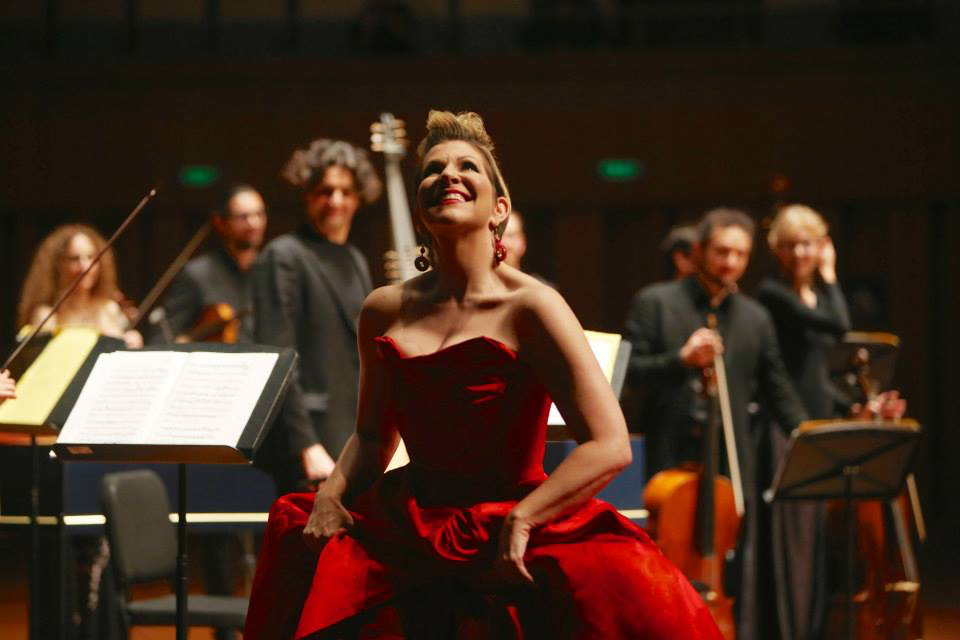 JOYCE DiDONATO  – one of the world’s most celebrated and glamorous opera stars, passionate advocate for The Arts. American operatic lyric-coloratura mezzo-soprano with a voice “nothing less than 24-carat gold” according to The Times. Multi Grammy Award winner of the 2016 Best Classical Solo Vocal Album (Joyce and Tony: Live at Wigmore Hall) and the 2012 Best Classical Vocal Solo. “The perfect 21st-century diva” said the Los Angeles Times, hailing her “glamour, charisma, intelligence, grace, and remarkable talent.”

“Joyce DiDonato effortlessly demonstrates why this extraordinary artist has become a leading star: her Agrippina is a tour de force of vocalism directed to dramatic ends combined with an acting performance that never misses an opportunity provided by either the text or the staging.”

Joyce is not only a great, brave and inspiring artist – one of the finest singers of our time – but she is also a transformative presence in the arts.

In all her endeavors, both on and off the stage, Joyce DiDonato engages audiences through her energy, imagination, and commitment to her art form. Through these qualities, and with a constantly questing spirit, she has nurtured the vocal, musical and dramatic talents that have taken her to the pinnacle of her profession as a performer. Equally, they serve her as an eloquent and formidable advocate for the transformative power of the arts as she takes music far beyond the world’s great stages – to educational institutions, refugee camps, and maximum-security prisons. “Music heals,” she has said, “and it can fire people up with purpose and courage to change the world.”

The winner of multiple Grammys and the 2018 Olivier Award, Kansas-born Joyce DiDonato is, in the words of the New Yorker, “perhaps the most potent female singer of her generation”, her voice having been described by The Times as “nothing less than 24-carat gold”. For all its beauty and agility, its true impact lies in Joyce’s capacity to illuminate character and meaning through nuances of colour and phrasing and her unfailingly communicative way with the text.

Joyce DiDonato’s repertoire spans five centuries and through her operatic career she has grown from the mischievous or melancholy ingénue (Rosina, Cendrillon, and Cenerentola) to tragic Queen (Maria Stuarda, Semiramide, and Didon), and from hormonal teenage boy (Cherubino and Sesto) to gallant medieval prince (Ariodante and Romeo). Her recent appearances include her stage debut as Didon in Berlioz’s epic Les Troyens in Vienna, a highly praised tour, recording, and stage debut as the title role in Handel’s Agrippina: and concert performances of more Berlioz (Les Nuits d’été) with Sir Antonio Pappano and the National Youth Orchestra of the United States at the BBC Proms. Critically acclaimed recitals of Schubert’s monumental Winterreise with Yannick Nézet-Séguin at the piano mark a true artistic arrival point. Over the past five years she has heightened audiences’ engagement with Baroque music through themed programmes of arias – ‘Drama Queens’, ‘Stella di Napoli’ and, especially, a 5-continent tour of ‘In War and Peace’, which she produced “to steer conversation and discourse towards peace through the power of harmony found in music and the concert hall”. This project has reached over 2.3 million viewers globally.

Joyce’s 2019/20 season sees her giving the staged premieres in the title role of Agrippina for both the Royal Opera House and the Metropolitan Opera, as well as her acclaimed Charlotte in Werther for the Met. Concert performances as Semiramide at the Liceu Barcelona round out her operatic season. For the second time, she is featured as Carnegie Hall’s Perspectives Artist with appearances with the Chicago Symphony Orchesrta under Riccardo Muti, Yannick Nézet-Séguin in concert and recital performing Mozart’s Ch’io mi scordi di te and Schubert’sWinterreise, a Joyce & Friends chamber music concert joined by the Brentano Quartet, a baroque inspired programme My Favourite Things with Il Pomo d’Oro, as well as her annual live-streamed masterclasses.

The season holds the final tour of her album In War & Peace to South and North America culminating at the Kennedy Center in Washington DC, as well as an international tour of My Favourite Things. Other highlights include a tour with the Orchestre Métropolitain under Nézet-Séguin; touring her latest album release Songplay in Europe and recorded concerts of Berlioz’s Roméo & Juliette with John Nelson and the Orchestre Philharmonique de Strasbourg – the third in the series of this highly extolled artistic collaboration.