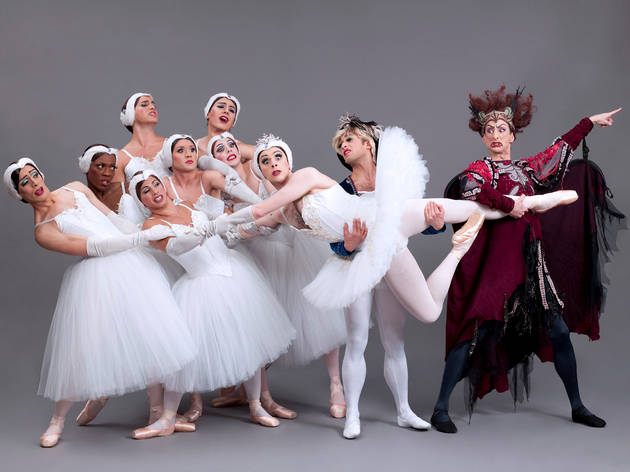 Les Ballets Trockadero de Monte Carlo was founded in 1974 by a group of ballet enthusiasts for the purpose of presenting a playful, entertaining view of traditional, classical ballet in parody form and en travesti, Les Ballets Trockadero first performed in the late-late shows in Off-Off Broadway lofts.

The TROCKS, as they are affectionately known, quickly garnered a major critical essay by Arlene Croce in The New Yorker, and combined with reviews in The New York Times  and The Village Voice, established the Company as an artistic and popular success.  By mid 19

75, the TROCKS’ inspired blend of their loving knowledge of dance, their comic approach, and the astounding fact that men can, indeed, dance  en pointe  without falling flat on their faces, was being noted beyond New York.  Articles and notices in publications such as Variety, Oui,

The London Daily Telegraph, as well as a Richard Avedon photo essay in Vogue, made the Company nationally and internationally known.

The Trocks in 2018. Photo: Zoran Jelenic

The 1975-76 season was a year of growth and full professionalization. The Company found management, qualified for the National Endowment for the Arts Touring Program, and hired a full-time teacher and ballet mistress to oversee daily classes and rehearsals. Also in this season, they made their first extended tours of the United States and Canada.  Packing, unpacking, and repacking tutus and drops, stocking giant sized toe shoes by the case; running for planes and chartered buses all became routine parts of life.

By mid 1975, the TROCKS’ inspired blend of their loving knowledge of dance, their comic approach, and the astounding fact that men can, indeed, dance en pointe without falling flat on their faces, was being noted beyond New York.

Performing with Shirley MacLaine (center) on her 1977 television special “Where Do We Go From Here?” (CBS Television)

Since those beginnings, the TROCKS have established themselves as a major dance phenomenon throughout the world. They have participated in dance festivals in Bodrum (Turkey), Bogota, Holland, Finland, San Luis Potosi, Madrid, Montreal, New York City, Paris, Lyon, Rome, Spoleto, Turin, and Vienna. There have been television appearances as varied as a Shirley MacLaine special, the “Dick Cavett Show,” “What’s My Line?” “Real People,” “On-Stage America,” with Kermit and Miss Piggy on their show “Muppet Babies,” and a BBC Omibus special on the world of ballet hosted by Jennifer Saunders. There have been solo specials on national networks in Japan and Germany, as well as a French television special with Julia Migenes.

A documentary was filmed and aired internationally by the acclaimed British arts program, The South Bank Show. The Company was featured in the PBS program, The Egg, about arts in America, winning an emmy award for the director, and appeared in a segment of Nightline in December 2008.

Several performances were taped by a consortium of Dutch, French and Japanese TV networks at the Maison de la Danse in Lyon, France, for worldwide broadcast and DVD distribution. Awards that the Trocks have won over the years include for best classical repertoire from the prestigious Critic’s Circle National Dance Awards (2007) (UK), the Theatrical Managers Award (2006) (UK) and the 2007 Positano Award (Italy) for excellence in dance. In December 2008, the Trocks appeared at the 80th anniversary Royal Variety Performance, to aid of the Entertainment Artistes’ Benevolent Fund, in London, attended by members of the British royal family.

It is a Company of professional male dancers performing the full range of the ballet and modern dance repertoire, including classical and original works in faithful renditions of the manners and conceits of those dance styles.

The TROCKS’ numerous tours have been both popular and critical successes – their frenzied annual schedule has included ten tours to Australia and New Zealand, twenty eight to Japan (where their annual summer tours have created a nation-wide cult following and a fan club), nine to other parts of Asia, twelve to South America, three to South Africa, and seventy six tours of Europe, including twenty one tours of the United Kingdom. In the United States, the Company has become a regular part of the college and university circuit in addition to regular dance presentations in cities in 49 states. The Company has appeared in over 34 countries and over 600 cities worldwide since its founding in 1974.

Taking it back to the 70s with Natalia Makharova

The original concept of LES BALLETS TROCKADERO DE MONTE CARLO has not changed.  It is a Company of professional male dancers performing the full range of the ballet and modern dance repertoire, including classical and original works in faithful renditions of the manners and conceits of those dance styles. The comedy is achieved by incorporating and exaggerating the foibles, accidents, and underlying incongruities of serious dance.  The fact that men dance all the parts–heavy bodies delicately balancing on toes as swans, sylphs, water sprites, romantic princesses, angst-ridden Victorian ladies–enhances rather than mocks the spirit of dance as an art form, delighting and amusing the most knowledgeable, as well as novices, in the audiences.    For the future, there are plans for new works in the repertoire:  new cities, states and countries to perform in; and for the continuation of the TROCKS’ original purpose:  to bring the pleasure of dance to the widest possible audience.  They will, as they have done for forty years, “Keep on Trockin’.”