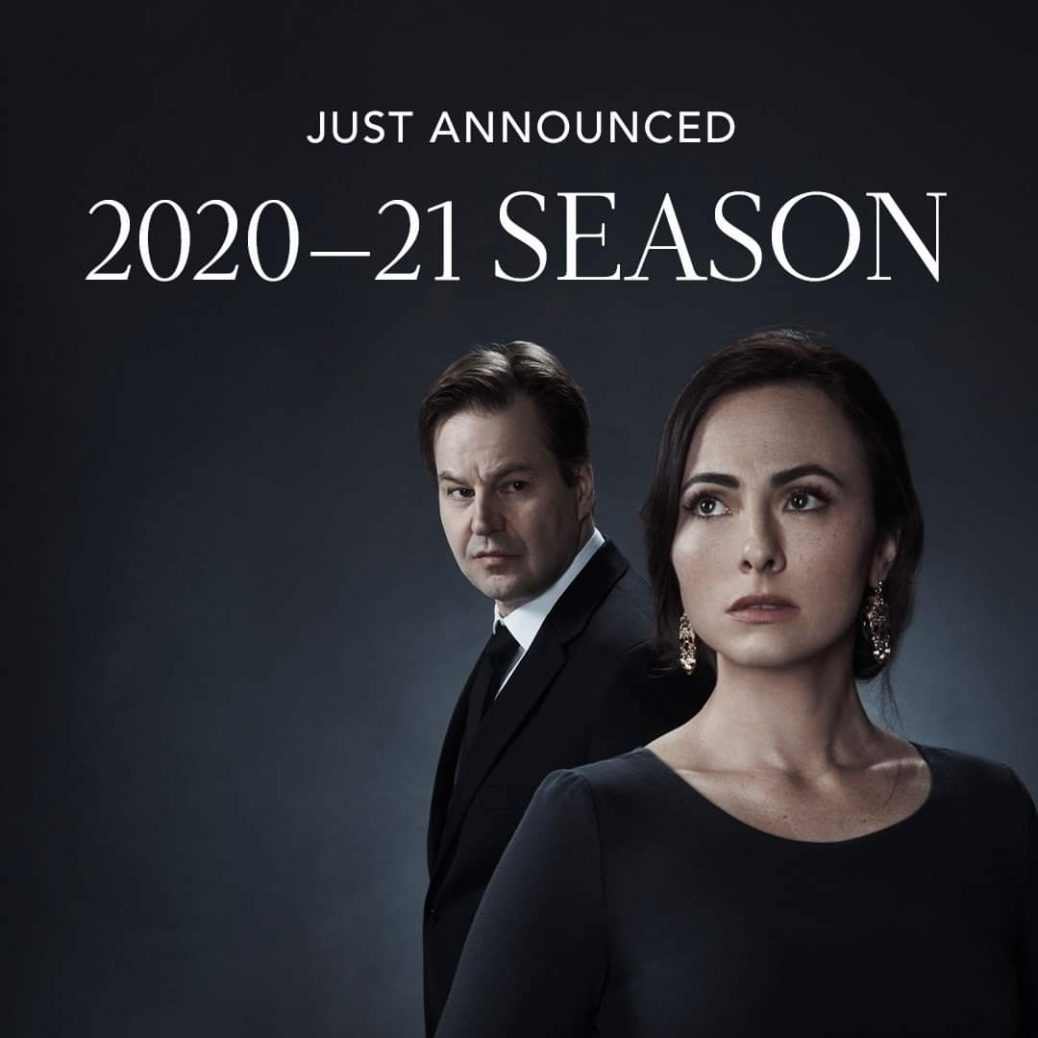 The Metropolitan Opera’s 2020-21 Season to Feature a New Aida, the Company Premieres of Dead Man Walking and The Fiery Angel, New Stagings of Don Giovanni, Zauberflöte

THE METROPOLITAN OPERA 2020-21 SEASON will open on September 21 with Michael Mayer’s new production of Aida, conducted by music director Yannick Nézet-Séguin and starring Anna Netrebko in the title role alongside Anita Rachvelishvili, and Piotr Beczała.

The Metropolitan Opera 2020-21 Season, in which Nézet-Séguin will conduct six productions—all of which will be featured as Live in HD transmissions—will be the first season in which the conductor formally assumes his full responsibilities as the company’s Jeanette Lerman-Neubauer Music Director. In addition to the Aida performances, Nézet-Séguin will conduct the Met premiere of Jake Heggie’s Dead Man Walking, a new production of Don Giovanni, revivals ofFidelio, Roméo et Juliette and Die Frau ohne Schatten, as well as two Met Orchestra concerts at Carnegie Hall in June.

“This is the season in which the Yannick era hits its stride,” said Metropolitan Opera General Manager Peter Gelb in a statement issued today by the company. “In conducting six operas, he will be present throughout the entire season, raising the artistic bar for the orchestra, the chorus, and the entire company.”

“The artistic excellence we achieve each season is due to the invaluable contributions in the pit and on stage by the great Met Orchestra and Chorus,” said Nézet-Séguin. “This is an exciting time for opera, and I’m thrilled to be sharing my passion for it with the Met’s discerning and loyal audience, while deepening my relationship with this great institution. As we look forward to future seasons, we will not only continue to expand our repertoire with new commissions by living composers but will also be adding to our artistic ranks with more women on the podium and a greater emphasis on artistic diversity.”

In total, the Met will present five new productions and eighteen revivals during the season. In addition to Aida, new stagings will Barrie Kosky’s production of Prokofiev’s The Fiery Angel; Simon McBurney’s new staging of Die Zauberflöte; and Ivo van Hove’s productions of Don Giovanni and Dead Man Walking. Additionally, the company announced that, for the first time it will present no performances during the month of February, and will instead extend its season into the month of June.

Following the opening-night premiere of its new Aida, the Met’s next new production will be Barrie Kosky’s staging of The Fiery Angel in November.

The Met premiere of Prokofiev’s opera will be conducted by Michail Jurowski and will feature Evgeny Nikitin as Ruprecht and Svetlana Sozdateleva in her Met debut as Renata.

Los Angeles Philharmonic music director Gustavo Dudamel will conduct performances of Simon McBurney’s new production of Die Zauberflöte when it premieres on the Met Opera House stage on New Year’s eve. The production, which will raise the orchestra pit so that the Met Orchestra musicians will be visible to the audience, is co-production of Dutch National Opera, English National Opera, and Festival d’Aix-en-Provence. Stanislas de Barbeyrac will sing Tamino; Christiane Karg is Pamina; Kathryn Lewek will sing the Queen of the Night; and Thomas Oliemans will make his Met debut as Papageno.

Anna Netrebko will sing Abigaille in performances of Nabucco, which takes the stage under Marco Armiliato in March, April and May. She shares the title role in Elijah Moshinsky’s production with Oksana Dyka.

George Gagnidze will take on the opera’s title role, while Varduhi Abrahamyan sings Fenea and Najmiddin Mavlyanov and Rafael Davila share the role fo Ismaele. Morris Robinson and Dmitry Belosselskiy will share the role of Zaccaria.

Performances of Sir David McVicar’s production of Roberto Devereux will be conducted by Maurizio Benini and will feature Angela Meade as Elisabetta and Jamie Barton as Sara. The opera’s title role will be sung by Stephen Costello and David Portillo.

The first revival of Mariusz Treliński’s production of Tristan und Isolde will feature Stuart Skelton and Christine Goerke in the title roles. Ekaterina Gubanova sings Brangäne, Greer Grimsley is Kurwenal and Günther Groissböck sings King Marke under the baton of Hartmut Haenchen in his Met debut.

Michele Mariotti leads performances of Il Trovatore in October, November and May. Sonya Yoncheva and Krassimira Stoyanova will share the role of Leonora, while Ekaterina Semenchuk and Anita Rachvelishvili sing Azucena; Roberto Aronica and Russell Thomas sing Manrico; and Quinn Kelsey and Ludovic Tézier take on the role of di Luna.

The Nézet-Séguin-led revival of Jürgen Flimm’s production of Beethoven’s Fidelio will star Lise Davidsen as Leonore and Brandon Jovanovich and Carl Tanner as Florestan. Golda Schultz and Sydney Mancasola will sing Marzelline and Alek Shrader is Jaquino.

Pretty Yende will sing Rosina in a revival of Il Barbiere di Siviglia conducted by Giacomo Sagripanti in his Met debut. Lawrence Brownlee takes on the role of Almaviva and Andrey Zhilikhovsky and Joshua Hopkins will share performances as Figaro.

A holiday presentation of Humperdinck’s Hansel and Gretel will be conducted by Edward Gardner and will find Elizabeth DeShong and Sasha Cooke in the role of Hansel and Hera Hyesang Park and Mané Galoyan singing Gretel. Thomas Hampson sings the role of Peter and Michaela Martens is Gertrude. John Daszak sings the Witch.

A revival of William Kentridge’s production of Lulu will be conducted by Sebastian Weigle and will feature Brenda Rae in the title role. Susan Graham will sing Countess Geschwitz and Matthias Klink is Alwa; Johan Reuter will appear as Dr. Schön and James Morris takes on the role of Schigolch.

John Copley’s production of Bellini’s I Pirata will star Diana Damrau and Angela Meade as Imogene alongside Javier Camarena’s Gualtiero; Christopher Maltman is Ernesto and Nicolas Testé will sing Goffredo under the baton of Maurizio Benini.

A revival of John Dexter’s production of Billy Budd will be conducted by Simone Young, and will feature Joshua Hopkins in the title role alongside the Claggart of Matthew Rose and Matthew Polenzani as Captain Vere.

The company will inaugurate its fifteenth season of its Live in HD broadcasts on October 15 with a transmission ofAida. The Live in HD series, which has sold more than 28.7 million tickets to date, now reaches more than 2,200 theaters in more than seventy countries. Subsequent Live in HD broadcasts slated for the 2020-21 season include Il Trovatore (November 7), Fidelio (December 12), Die Zauberflöte (January 16), Roméo et Juliette (January 30), Don Giovanni (March 27), Dead Man Walking (April 17), Die Frau ohne Schatten (April 24), Nabucco (May 8) and Il Pirata (May 22).

In addition, the Met Orchestra will perform three concerts at Carnegie Hall during the 2020-21 season. Semyon Bychkov conducts a June 10, 2021 concert that will feature Waltraud Meier singing Wagner’s Wesendonck Lieder and a performance of Shostakovich’s Symphony No. 7 in C Major. A June 17, 2021, Berlioz concert conducted by Nézet-Séguin will feature Joyce DiDonato in excerpts from Les Troyens, as well as a performance of the Symphonie Fantastique. On June 24, Nézet-Séguin will lead the orchestra in the first act of Die Walküre featuring performances by Christine Goerke, Brandon Jovanovich, and Günther Groissböck; also on that program are Missy Mazzoli’sSinfonia (for Orbiting Spheres) and Strauss’s tone poem Don Juan.

Metropolitan Opera will also present additional Sunday matinee performances during the 2020-21 season, with each of the twenty-two Sunday matinees being followed by an onstage post-performance discussion with the opera’s stars.

More information can be found at The Metropolitan Opera.