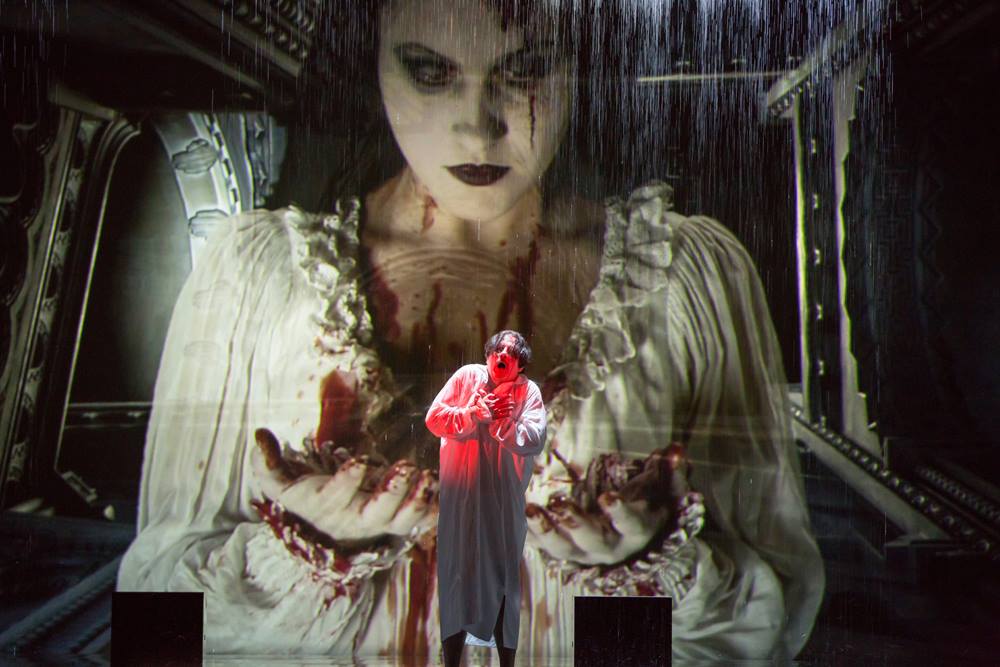 Composer Gordon Getty : The Fall of the House of Usher is one of the classics gifted us by the great Edgar Allan Poe. While instantly familiar to generations, its musical and dramatic potential has rarely been plumbed in previous theatrical history.

That has now changed. An unlikely billionaire and composer Gordon Getty, has given us a musical/dramatic treatment which is both remarkably faithful to the spirit of the original work while, at the same time, affording us an experience that is unprecedented and very creative.

It is not that every element in this experience is flawless or perfect. One can quibble about some longish dialogues in recitative where the need for narrative has overwhelmed the need for melodic variety and unpredictability.

And yet, despite some minor flaws, Getty’s opera, Usher House, and the even more imaginative and creative production from Peter Rosen that has brought it to light, remains a breathtaking and unforgettable encounter. In the deep and disturbing heart of this work, and of this profound achievement, the spectator was transported, entranced, taken to a place very different from those with which the jaded opera-goer is normally familiar. 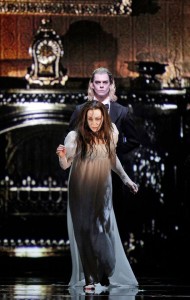 Composer Gordon Getty The Fall of the House of Usher.

Gordon Getty Composer’s Usher House was both startling in its innovation and striking in its beauty.

The secret is an environmental depth to this performance that is greater than the sum of its parts. Most remarkable and noteworthy was the technical wizardry utilized to tell this startling and profoundly frightening tale. In recent years, we have been treated to quite a few operatic productions which have used animated 3D graphics as a means of enhancing and deepening the sense of reality. One particularly noteworthy achievement in that regard was the Metropolitan Opera’s recent production of The Enchanted Island (an operatic pastiche made up of selections from several Baroque operas). In this production, however, such wizardry became more than decoration or embellishment; instead, it was used to tell a large part of the story, with eloquence and poetry. Undulating walls, paintings, towers, windows, all were used to create a sort of visual music of their own, which complemented and enhanced the musical score.

Not that the score was without some telling and eloquent moments all their own. One particularly sweet and moving moment was the recollection by the story’s narrator, Eddie Poe, of a song which an old sweetheart used to sing. It was one of those moments when the music transcended its extensive, and occasionally longish, tendency to recitative, and created a moment that was moving and intimate. There were quite a few such moments. The score may not be a perfect masterpiece; but there is enough in there to achieve that for which every opera strives, an emotionally compelling narrative that leaves the audience feeling that they have been somewhere, that they have been on a profound and significant journey. During many of these moments, there was musical eloquence that both reinforced and transcended reality.

All of which provided fertile ground for the stellar performances we witnessed from this cast.

And what a cast! Every single performer brought a special spark to this dark and sinister world. Benjamin Bevan’s performance as Roderick, the tortured brother, combined first-rate lyric vocal production with an almost hysterical edge to his angular and often anti-lyrical music, a sharp contrast to the more elegiac music afforded Poe. And, in a very special presentation, as startling for the beauty and presence of its makeup as for the superb gifts of the performer, Kevin Short gave us an interpretation of Doctor Primus that was unbearably compelling and overwhelming.

One cannot close without lauding the great success director David Pountney had integrating his very talented performers with the three-dimensional world created by the set and graphic design team. Under his skilled leadership, not only were the performers thoroughly enmeshed in this world which was created before our eyes; the spectators themselves felt almost as enmeshed, a tribute to the combined efforts of everyone, both the creative team and the performers. Pountney specializes in off-beat material, and we can only be grateful that someone of his talent chooses to focus on innovative and original material like this.