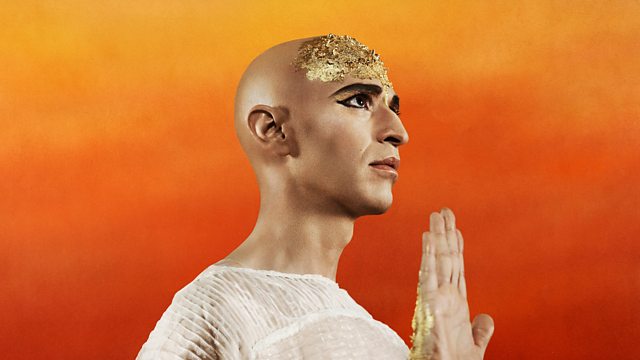 Great Performances at the Met: Akhnaten April 5 on PBS

The final part of Glass’ Portrait Trilogy (preceded by “Einstein on the Beach” and “Satyagraha”) and sung in English, Phelim McDermott’s production is set during the 17-year reign of Egyptian Pharaoh Akhnaten, around 1350 B.C. At the funeral of Amenhotep III, the heart of the deceased pharaoh is weighed against a feather to determine if he will travel through into the afterlife. Then, Amenhotep’s son steps forward and his coronation ceremony begins. As the new pharaoh rises to make his first pronouncement at the Window of Appearances, he reveals his intentions to form a monotheistic religion.

Akhnaten leads a revolt to banish the old religion and replace it with his own, but he enters the temple and finds the priests still performing the old religious rituals. Akhnaten banishes them and forms the new order of Aten. Meanwhile, Queen Tye is worried as she senses unrest beyond the city’s walls. A crowd gathers outside the palace gates and break through the doors, marking the tragic end of Akhnaten’s reign. Internationally acclaimed American mezzo-soprano Joyce DiDonato—the star of the Met’s new production ofAgrippina—is program host.

Experience Philip Glass’ masterpiece portraying the Egyptian Pharaoh as he rises to the throne.

Under the leadership of General Manager Peter Gelb and Music Director Yannick Nézet-Séguin, The Metropolitan Opera is one of America’s leading performing arts organizations and a vibrant home for the world’s most creative and talented artists, including singers, conductors, composers, orchestra musicians, stage directors, designers, visual artists, choreographers, and dancers. The company presents more than 200 performances each season of a wide variety of operas, ranging from early masterpieces to contemporary works. In recent years, the Met has launched many initiatives designed to make opera more accessible, most prominently the Live in HD series of cinema transmissions, which dramatically expands the Met audience by allowing select performances to be seen in more than 2,200 theaters in more than 70 countries around the world.