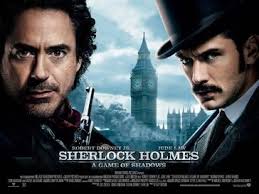 A dark comedy in two acts … Thirty years after the conclusion of The Adventure of Transylvania Nobleman an elderly Sir John Watson is blackmailed by the new female head of MI6 Via flashbacks, we learn the shocking truth behind what caused the disappearance of the world’s greatest detective

THE GAME’S AFOOT when Mi5 hatches a Secret Plot to blackmail SIR JOHN WATSON into revealing the Shocking Truth behind the Mysterious Disappearances of the World’s Greatest Detective: SHERLOCK HOLMES; & that nefarious Napoleon Of Crime: PROFESSOR MORIARTY.

Switzerland 1889 – Sherlock Holmes, whilst locked in heroic combat with his nemesis, Professor Moriarty, plummets tragically to his death over the edge of the Reichenbach Falls – Or so the official story goes…

London 1919 – A great war has been won – But the battle rages on – For the game’s afoot when, deep within a secure location far below King’s Cross Station, the dangerous female head of MI5 secretly plots to blackmail retired gentleman assassin, Sir John Watson, into revealing the final shocking truth behind the mysterious disappearances of Sherlock Holmes, & that nefarious Napoleon of Crime: Professor Moriarty.

Yes, yes that’s all very good Holmes, but why in David Lloyd George’s name do these ladies & gentlemen of Outpost 31 insist on returning with their intelligent entertainments to the Victoria Fringe every year?

Well my dear Watson, I can clearly deduce that firstly: they must be somewhat gluttons for punishment.

That the Victoria Fringe festival is realistically the only place where their kind of small independent enterprise can reach such a potentially large local audience for such a relatively small fiscal outlay.

Unless an established theatre takes a shine to their work and resolves to take a chance on them.

Which as luck would have it Watson – Has just this very moment occurred.

By Jove Holmes, you’re right – For I see there is right before me an article in today’s Times describing how Theatre Inconnu is to present Outpost 31’s playwright Mr. David Elendune’s national award-winning script of FRANKENSTEIN this coming September.

Best we had book early for that one!

Indeed: I will leave Mrs. Hudson a note.

Oh, and speaking of luck Watson – (Because I understand you are a man who enjoys a wager or five) – The odds of winning the fringe entry lottery are reported here as being rather less than one in four.

Well, it is my understanding that Outpost 31 have now won the confounded raffle five times in a row.

You suspect that they may have had help in this matter?

Come now Watson, that imagination of yours will be death of us both – I mean, Good Lord, you will have us all believing in giant spectral hounds next!