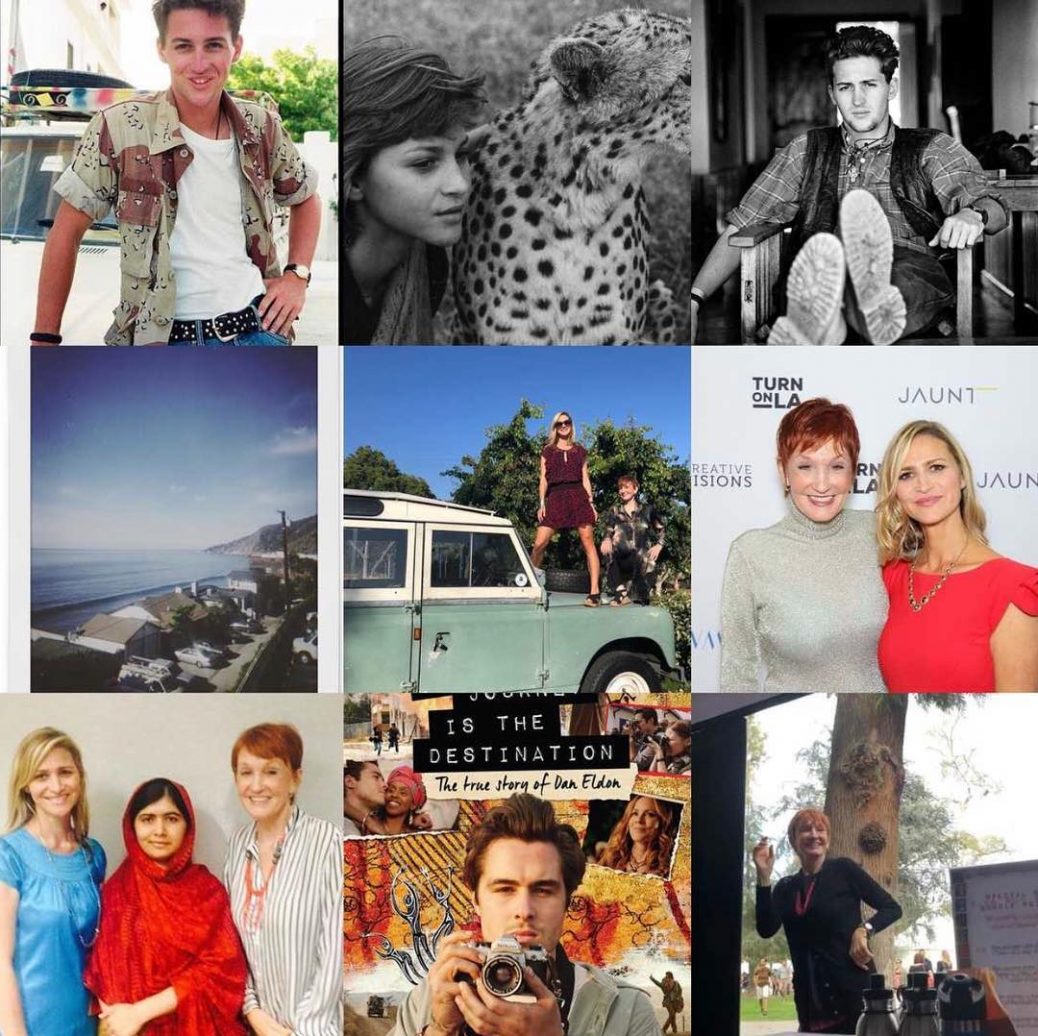 Creative Visions Foundation (CVF) is inspired by the life of Dan Eldon, an artist, adventurer and activist killed in Somalia in 1993 while covering the conflict as a photojournalist for Reuters News Agency. To honor his legacy, in 1998 his mother Kathy Eldon and sister Amy Eldon Turtletaub founded the Creative Visions Foundation, a publicly supported 501 (c) 3 organization, to help others like Dan use media and the arts to create meaningful change in the world around them.

Over the past fourteen years, CVF has incubated more than 100 projects and productions on 5 continents, by providing fiscal sponsorship, mentorship, inspiration, fundraising, connectivity, and step-by-step toolkits for launching projects. To date, our creative activists under our umbrella have touched more than 90 million people and raised more than $11.2 million to fund their projects.

We are Creative Activists

Our mission is to spark awareness of critical issues and ignite change through impact media, art and technology: creative activism.

We ignite social change globally through our network of creative activists and the power of media and the arts.

Creative Visions Productions originates media that focuses awareness on critical issues and catalyzes positive change.
The Creative Activist Network is a vibrant collective of activists, artists, filmmakers and advisor and organizations that use arts, media and technology to ignite positive social change.
Our Fiscal Sponsorship Program empowers individuals to raise the funds they need to be successful.
Through Rock Your World, our human-rights based program for middle and high school students, we teach youth to use their voices and the power of media to become change makers in their communities and our world.
The Dan Eldon Legacy celebrates Dan’s infectious spirit through his art, sense of curiosity and compassion- and his creative activism.

Matt Hussey serves as a matchmaker on “Read for Love,” NBC’s innovative and dramatic new relationship show about making real connections. Matt chats with Tara Hunnewell at the Creative Visions Foundation, Turn On LA Event. For 15 years CVF has been leading a revolution of creative activism that unites grass roots activists with industry leaders in film, television, music, photography, journalism, visual arts, and digital media.
CVF has supported over 100 Creative Activist Projects which have impacted over 80 million people world wide.

Caine Monroy chats with Actress Tara Hunnewell about his unique arcade made out of cardboard at his fathers shop. Filmmaker Nirvan Mullick was Caine’s first customer and the short film that Nirvan created has over 3 Million Views and Caine Monroy has raised over 125K for a Scholarship Fund.

Alexandra Chun chats with Actress Tara Hunnewell about her new film project “Carry The World”. The Creative Visions Foundation is supporting the film and the event was “TURN ON LA” in Santa Monica.

Jon Turtletaub (EXEC PROD TV SERIES “Common Law”, “Harper’s Island”, “Jericho” FILM “National Treasure”, “The Kid” chats with Actress Tara Hunnewell about the Creative Visions Foundation and how important the Non-Profit organization is. The Event was called “Turn On LA” and the Hollywood Brass came out to support. CVF has supported over 100 Creative Activist Projects which have impacted over 80 million people world wide.

Kathy Eldon launched Creative Visions as a production company to create media that matters by sparking the awareness of critical issues and ignite change ..

In the spirit of ideas worth spreading, TEDx is a program of local, self-organized events that bring people together to share a TED-like experience. At a TEDx event, TEDTalks video and live speakers combine to spark deep discussion and connection in a small group. These local, self-organized events are branded TEDx, where x = independently organized TED event. The TED Conference provides general guidance for the TEDx program, but individual TEDx events are self-organized.* (*Subject to certain rules and regulations)

Huffington Post: Caught in the Act with Kathy Eldon and John Edward

Kathy Eldon’s In the Heart of Life

To pre-order your copy of In the Heart of Life click: http://www.amazon.com/In-Heart-Life-A…

To learn more about In the Heart of Life by Kathy Eldon click: http://kathyeldon.com/in-the-heart-of…

Founder and Chairman of Creative Visions Foundation and Creative Visions Productions, Kathy Eldon tells an emotional story about how she overcame adversity and tragic loss to create a social movement during the closing plenary of the 2014 Points of Light Conference on Volunteering and Service

Kathy Eldon talks with Julie Thompson during an interview at the 2011 IAB MIXX Conference & Expo.

A Culture Collective Video, shot by Chase Bowman, Brian Hardin, and Jacob Devaney. Kathy talks about art, media, technology, and activism.
You can learn more at www.culturecollective.org or www.creativevisions.org

Safari as a way of life: Amy Eldon Turteltaub & Kathy Eldon at TEDxTeen:

Amy Eldon Turteltaub grew up in Nairobi, Kenya and London, England. Following the murder of her brother, Dan, a 22-year old Reuters photojournalist, killed by a mob while covering a conflict in Somalia, Amy changed her college major to Communications, determined to tell stories that would bring people together, not tear them apart. Amy’s first film explored the risks faced by front-line journalists like her brother. Amy hosted Dying to Tell the Story, which was nominated for an Emmy and distributed world-wide by CNN. Amy also co-produced Soldiers of Peace, about the Children’s Peace Movement in Colombia for CNN, and in 2003 co-created and hosted Global Tribe, a PBS series about ordinary people finding solutions to the challenges they face in their local communities. Amy is the co-author of three books, published by Chronicle Books, Soul Catcher: A Journal to Help You Become Who You Really Are; Angel Catcher: A Journal of Loss and Rembrance and Love Catcher: A Journal to Invite Love into Your Life and co-founder of Creative Visions Foundation, which supports “creative activists” who use media and the arts for social change. She is currently an Executive Producer of Extraordinary Moms a documentary special hosted by Julia Roberts for the new Oprah Winfrey Network (OWN). Amy, the mother of two children, is married to Director Jon Turteltaub and lives in Los Angeles.

Kathy has worked as a teacher, journalist, author and film and television producer in England, Africa and the United States. Following the murder of her son, Dan, a 22 year old photojournalist, in Somalia, she and her daughter, Amy, founded Creative Visions Foundation (CVF), to support “creative activists” like Dan, to use their creative talents to change the world around them. Since then, CVF has assisted more than 80 artists, filmmakers, playwrights, leaders of other social movements and others who use media and the arts as vehicles of social change. Through their for-profit sister organization, Creative Visions Productions, Kathy and Amy have produced award-winning television and film projects, including a feature, Lost in Africa, about elephant conservation; an acclaimed PBS series, Global Tribe, profiling grass-roots social entrepreneurs; an Emmy nominated Turner Broadcasting documentary, Dying to Tell the Story, profiling journalists who risk their lives to do their jobs, and Soldiers of Peace: A Children’s Crusade, a CNN documentary about the Colombian children’s peace movement. On Mother’s Day, 2011, the new Oprah Winfrey Network (OWN), will present their latest project: Extraordinary Moms. Featuring Julia Roberts, Hillary Clinton, Rosie O’Donnell, Christiane Amanpour, the documentary special focuses on the power of mothers to change our world. Ask Kathy about “On Revolution,” a movement launched by Creative Visions that turns people on to the power they have to change our world.

How To Teach Creativity To Your Kids – Kathy Eldon

Kathy Eldon, Parent with a Purpose and Founder & CEO of the Creative Visions Foundation, shares advice for parents on the best ways to teach your kids how to be creative.

Kathy and I talk about social change, catalyzing action, creative activism and choosing love and why fearlessness matters more than we know.