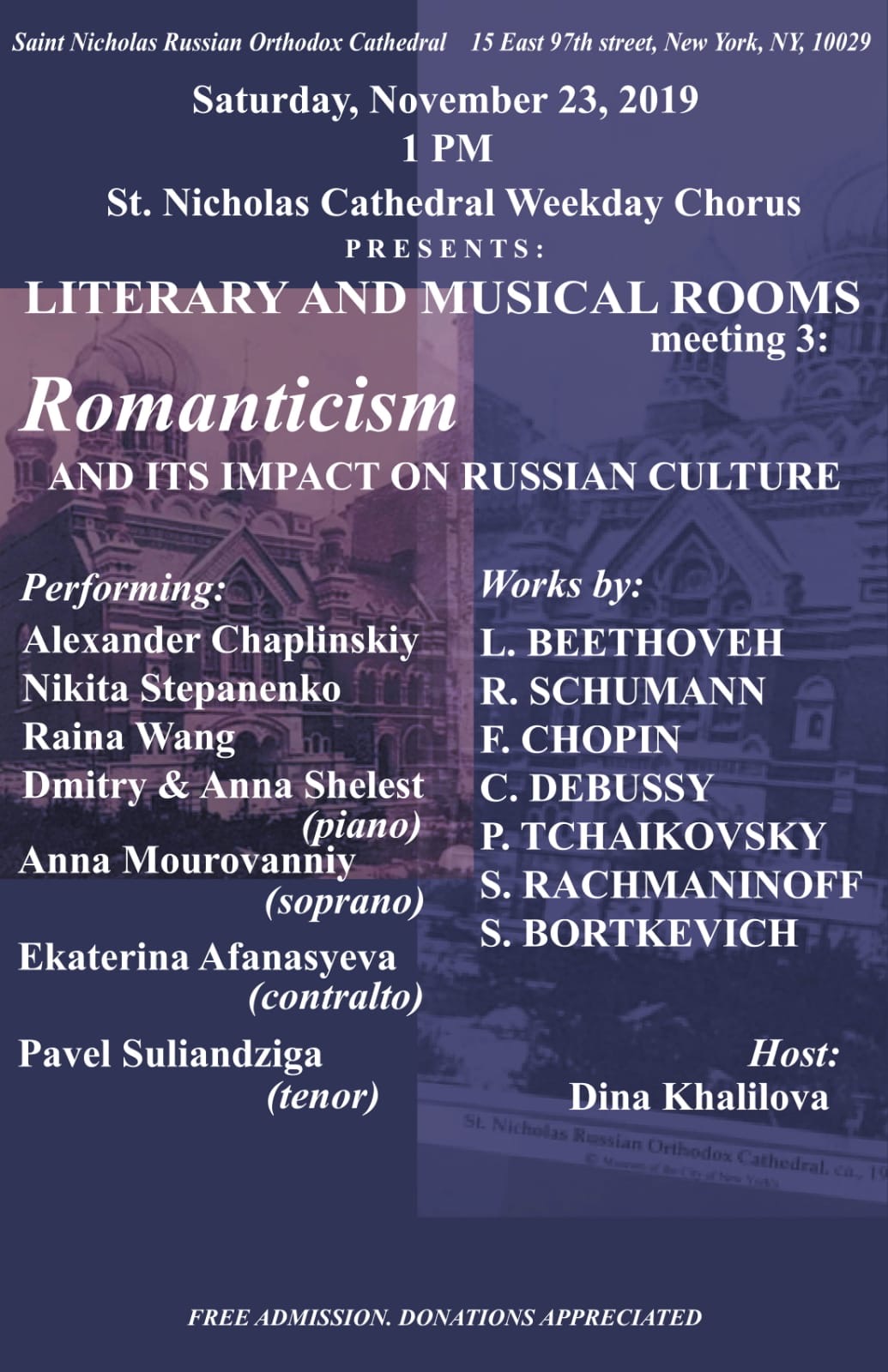 Event 3 Romanticism and its impact on Russian culture

Romanticism is a phenomenon that had a major impact on the formation of the human culture throughout almost 150 years from the last two decades of the XVlll up to the middle of the XX centuries.

The famous Russian culture which the entire world is amazed by seems to be a direct successor of the European romantic traditions. The founders of our parish, those, who had initiated  the construction of our Cathedral in the heart of New York, Manhattan, had the same educational background. That is particularly important while we are commemorating the 117th anniversary of the day our Temple had been sanctified.

The identity of a missionary was intrinsic to many romantic composers. The famous originally Polish composer Frédéric Chopin is a splendid example to this. He was the first to create the key element of the music of late romanticism, clearly stated ‘national trace’, a kind of ‘declaration of the right of the nation for its cultural self-identification’. This is quite clearly heard in our first composition performed

Chopin started to compose it in Warsaw, right before moving to Paris which was considered the ‘capital of the world’ at the time. Polonaise itself is a Polish national dance. On the other side, this dance opened all the great balls in Europe and it was extremely popular back then. And lastly, it was a clear reference to Oginsky Polonaise which was named ‘Farewell to the Homeland’. It was written in 1794 when Poland was erased from the maps due to the division of its territory between Russia, Prussia and Austria-Hungary.

Put together, all this helps to understand the true meaning of the music: from a piece of my home which I have taken with me in my heart I will recreate my Motherland and will bring it on my shoulders to the capital of the world’

‘IT WAS IN EARLY SPRING’ lyrics by Aleksey Konstantinovich Tolstoy and ‘WE WE’RE SITTING WITH YOU’ lyrics by Daniil Maksimovič Ratgauz.

Ludwig van Beethoven is traditionally considered the”last classic”. It is true and not true at the same time. Of course, when we mention a Sonata or a Symphony(this was the name of the classic works of a large formwritten according to the canons of VienneseClassicism), it is his compositions that first come tomind. Alongside with that, his works are thebeginnings of musical romanticism.  It was Beethoven who created a form of chamber vocal music, the lyricalsong cycle, which later became very popular amongromantic composers. Not to mention his famous NinthSymphony, in which he did a trick that none of the”official romantic composers” did not dare to repeatuntil Gustav Mahler three quarters of a century later.

The literature of German romanticism had a stronginfluence on Beethoven. Suffice it to say whose textbecame the literary source for the finale of theaforementioned Ninth Symphony.

He also thought highly of the work of JohannWolfgang Goethe. The story of their relationship isvery entertaining, although it does not have the mostcheerful end.

Mikhail Lermontov is considered to be the “mainromantic” of Russian literature. The little poem I amabout to read is his translation of Goethe’s poems.

Many romantic composers sought to synthesize the arts, especially music and literature. It is the reason why the genre of the song cycle flourished, like “Die schöne Müllerin” and “Winterreise” by Schubert, as well as “Woman’s Love and Life” and “Dichterliebe”by Robert Schumann, who can be considered the mastermind of the European romanticism.

In addition to the composer’s gift, Schumann possessed remarkable literary skills, he was able to define the philosophical paradigm of his work. And, of course, he widely took advantage of such invention by his colleagues-romantics as program (or “program music”), when through the name of the play or its parts or direct literary outlining of the plot, the content of the musical piece is revealed with highest possible clarity. The traditional musical forms are also undergoing changes. We will hear in the next composition how exactly this is happening.

Since we are talking about program music, Schumann has most clearly demonstrated its principles in his cycles of works for children: “Children’s scenes” and ” Album for youth.” The second cycle was accompanied by the author’s literary appendix named “Vital rules for musicians”. Musical literature for the education of children had been written before, but genre scenes with a clear plot, told on behalf of the child, seen through the eyes of the child and heard by the ears of the child – such music was written for the first time. Here we can already see a turn from music addressed only to those who play, to music that you can just listen to, despite the fact that it is still far from the invention of phonograph.

The same tradition was continued by Tchaikovsky, who wrote the “Children’s album” and the cycle “16 songs for children”. One of his popular songs is

Romanticism infiltrates ballet as well. In the second half of the 19th century it was replaced by a new style impressionism. But young composers none the less take the lessons and play the works of their teachers-predecessors at the exams. For example, Claude Debussy won the second prize for his performance of Schumann’s Sonata.

In 1889 he was a house pianist and music teacher in the family of the wealthy Russian philanthropist Nadezhdavon Meck. Debussy actually spent the summer of 1881 and 1882 in the Moscow region, in their manor Pleshcheyevo. In her house Debussy met the new Russian music by Tchaikovsky, Borodin, Balakirev and composers close to them. In a number of Von Meck’sletters to Tchaikovsky she occasionally mentions a “dear Frenchy”, who speaks admiringly of Tchaikovsky’s music and reads the scores admirably.

Initially, while Debussy was only developing his style, he was said to be soaked with Mussorgsky, and musicians joke about early Rachmaninoff that if you need to briefly describe his style, you need to add Tchaikovsky and Debussy whose piano music obviously bears the imprint of Chopin’s direct influence.

SERGEI  RACHMANINOFF. ‘FOR A LIFE OF PAIN I HAVE GIV’N MY LOVE’. Lyrics by Taras Shevchenko translated by Alexei Pleshcheev.

If we are talking about the influence of romanticism on Russian culture, let us remember the history of the ballet ” the Nutcracker»:

In 1890 Tchaikovsky received an order from the Directorate of the Imperial Theaters for a two-act ballet to be staged in one evening.

For the plot, he chose the famous fairy tale by E. T. A. Hoffmann (who is a German romantic) “the Nutcracker and the mouse king” from the collection “Serapion’sbrothers” (1819-1821). The tale was used not in the original, but in a French retelling by A. Dumas-father called “the Story of the Nutcracker”. According to his brother Modest, Tchaikovsky first “wrote down the plot of the Nutcracker as told by Vsevolozhsky”, and then began to work on the ballet with the choreographer Marius Petipa.

The composer’s work was forced to stop in the spring of 1891, when he went to the United States for the Grand opening of a new concert hall, later known as “Carnegie Hall”. Composing even on his way, on the ship, however, the composer did not have time to finish the work by the deadline appointed by the Directorate – the premiere of the ballet had to be postponed until the next season.

During January and February of 1892, Tchaikovsky finished the music and orchestrated the score. In March, a Suite from the music for the ballet was performed at one of the symphonic concerts of the Russian Musical Society under the direction of the composer himself. The success was deafening: five of the six numbers were repeated at the request of the public.

Performed by DMITRY AND ANNA SHELEST.

At the end of our concert, let us recall Tchaikovsky’s friendship with Alexei Nikolaevich Pleshcheyev, which resulted in 20 romances. 14 of the 16 aforementioned “Songs for children” are also written on his poems.

TCHAIKOVSKY. «LEGEND.» The author’s arrangement for the mixed chorus of the song from the cycle “16 songs for children”, lyrics by Alexei Pleshcheyev (translation of the English poem of 1877).