Want to show up to the Metropolitan Opera like Cher in Moonstruck, but lack the cash? Fear not! Grab a date and take in an epic onscreen opera performance at Lincoln Center’s plaza.The Met Summer HD Festival presents recent adaptations of Otello, Il Trovatore, Lucia de Lammermoor and other heartbreaking tragedies. The festival kicks off on Friday 26 with a screening of 1985’s opulent, Oscar-winning Amadeus.

The Met’s annual Summer HD Festival of free outdoor opera screenings on Lincoln Center Plaza returns for its eighth season. The series will present ten performances from the company’s acclaimed Live in HD series of movie-theater transmissions; and for the third year in a row, the Met is collaborating with the Film Society of Lincoln Center to open the festival with an opera-related Hollywood film. 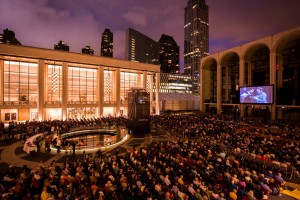 Friday, August 26, 7:45 pm
Amadeus will open Met Opera Summer HD festival.
Amadeus won the Academy Award for Best Picture in 1985, among seven other Oscars that year, including for director Miloš Forman and F. Murray Abraham as Salieri. Based on Peter Shaffer’s Tony Award-winning play (with an Oscar-winning screenplay by the playwright himself), Amadeus is famous for its bawdy portrayal of the genius composer, for its ravishing art direction, and for the scene in which Austrian Emperor Joseph II dubiously asserts that one particular Mozart composition had “simply too many notes.” The screening is dedicated to the memory of Shaffer, who died this past June. A co-presentation of the Film Society of Lincoln Center and the Metropolitan Opera.  Approximate running time: 3 hours, This film is rated R.