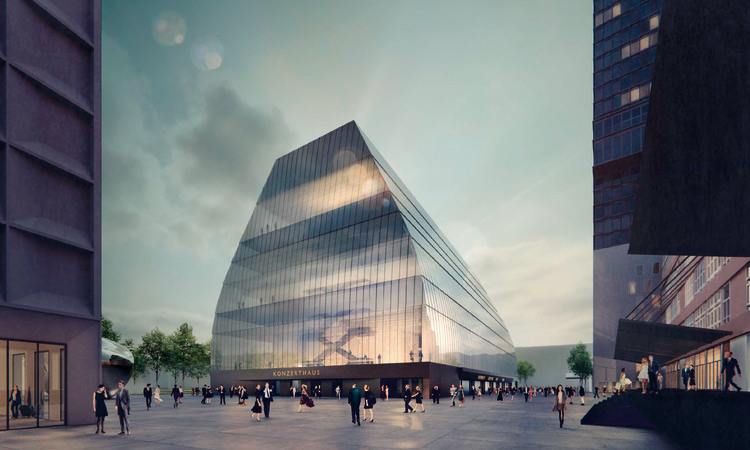 Munich – New Bavarian Radio Symphony Orchestra Hall  will be built in Munich city. It will be the new home for Bavarian Radio Symphony Orchestra. The Bavarian Radio Symphony Orchestra has been based in Herkules saal in Residence in Munich for many years. The number of concerts exceeds 80 annually. However, the space was too tight and the equipment became obsolete, and Maris Jansons who served as chief conductor from the 2003/2004 season were strongly appealing for the construction of a new hall. The new hall is constructed in the eastern area where factories gather, it has a large hall (accommodating 1,800 people), a small hall (accommodating 600 people), it will be a modern appearance with glass. The budget is 300 million euros, the completion time is undecided. The design is “Cukrowicz Nachbaur Architekten” of Bregenz, Austria, and the acoustic design will be handled by Yasuhisa Toyota of Japan’s Nagata Acoustic design.

In Munich as a concert venue for classical music concerts, there is Philharmonic (auditorium 2387) in the general culture center “Gasteig” opened in 1985, and Münchner Philharmoniker is using it as a base. However, due to poor acoustic reputation and over 30 years since construction, Munich has decided to renovate over 5 years with a budget of 450 million euros from 2020. Therefore, the city has also decided to build a new hall with a budget of 30 million euros to secure a place to play such as Münchner Philharmoniker. The hall is wooden and has auditorium 1,800. Also here is Mr. Toyoda’s acoustic design. Munich city plans to sell the hall to the private sector after the renovation work of “Gasteig” .

Meet Me At The Opera enhances your opera experience. A place feels better when your friends are there. Find a friend to go to the opera, for any reason.
‎Opera Houses · ‎Events · ‎Our Blog · ‎JOIN
Share this
2 likes
Related Articles
0 Comments