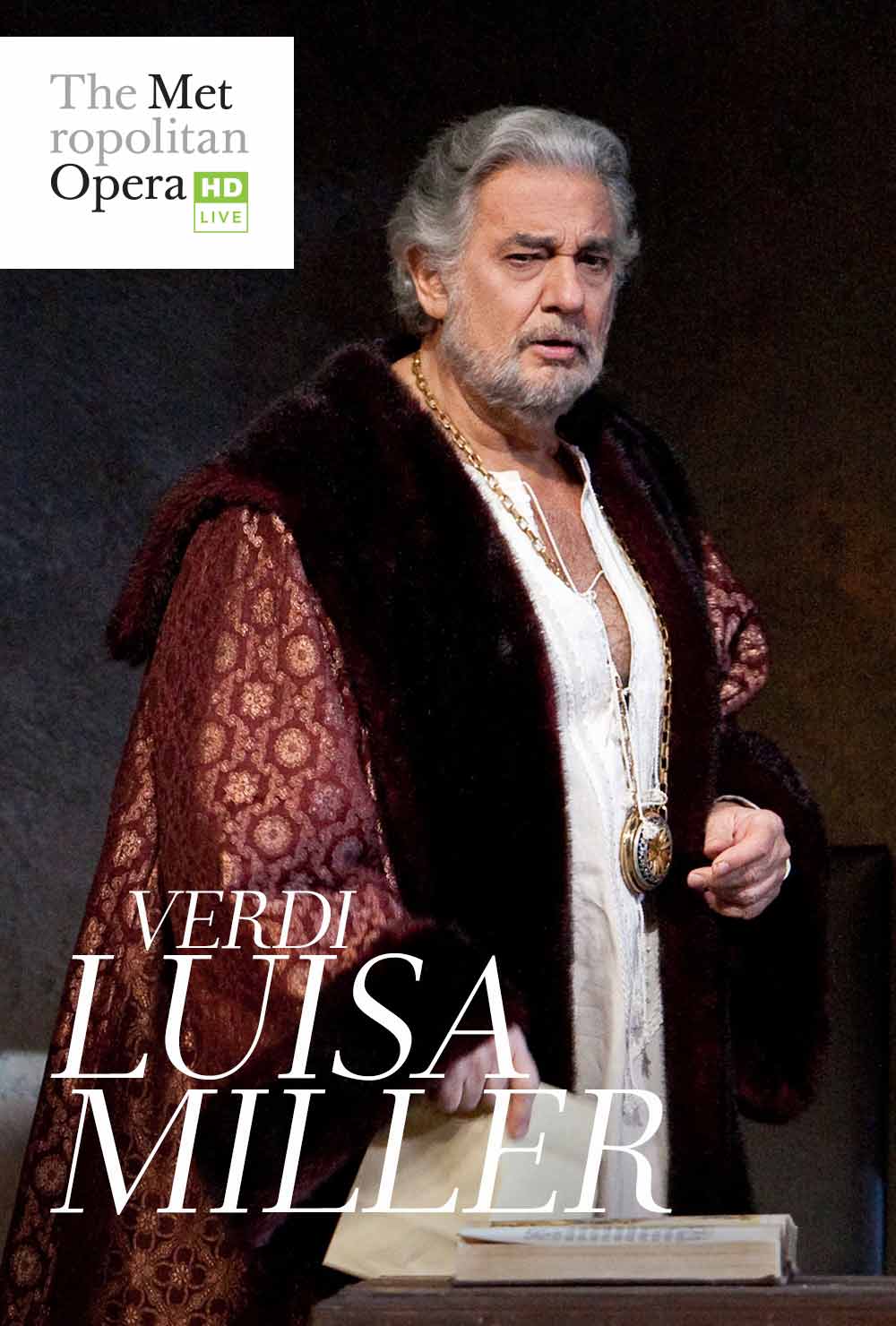 Premiered immediately before the enduring masterpieces Rigoletto, Il Trovatore, and La Traviata, Luisa Miller incorporates the youthful vitality that had made Verdi an international sensation while also looking forward to the dramaturgical discipline and sophistication of those later works. In this Live in HD performance, soprano Sonya Yoncheva takes on the riveting title role, capping off a season in which she starred in three cinema transmissions. As her father, Miller, the legendary Plácido Domingo adds another baritone role to his extensive repertoire. Tenor Piotr Beczała as Rodolfo, Alexander Vinogradov as Count Walter, and Dmitry Belosselskiy as Wurm round out the illustrious cast, and Bertrand de Billy conducts.

England, 19th century. Luisa, daughter of an old soldier, is in love with a young man she knows as Carlo, but who is actually Rodolfo, the son of the local lord, Count Walter. The two lovers proclaim undying fidelity, but Miller, Luisa’s father, is dubious. His fears are confirmed when Walter’s retainer, Wurm, who also loves Luisa and hopes to marry her, reveals Rodolfo’s identity.

In his castle, Walter, informed of Rodolfo’s love for a commoner, resolves to end their relationship. Instead, he hopes to have his son marry a widowed duchess, Federica. When Rodolfo is alone with Federica, he reveals that he loves another, but the duchess, who has been infatuated with him since childhood, refuses to break their engagement.

Back in the village, Miller tells Luisa that Rodolfo has deceived her and is about to contract a wealthy marriage. The young man, however, comes to plead his sincerity. When Walter storms in and insults Luisa, Miller defends her. The count orders both Luisa and her father consigned to prison, but Rodolfo secures their freedom by threatening to reveal how his father, with Wurm’s assistance, murdered his cousin to gain his present position.

Inside her home, Luisa learns that her father has been jailed for insulting Walter. Wurm appears and tells her that the only way she can save Miller is to write a letter admitting she sought Rodolfo for his wealth and pledging herself to Wurm. He then compels her to go to the castle and declare her love for him before the duchess.

At the castle, Wurm presents Luisa’s letter to Walter, and the two plot to send it to Rodolfo. Wurm then brings in Luisa. Goaded with threats by Wurm and Walter against her father, she professes her love for Wurm to Federica.

In the castle courtyard, Rodolfo receives Luisa’s letter. In despair, he is about to attack Wurm when Walter persuades him that marrying Federica will be the best way for him to avenge Luisa’s treachery.

At home, Miller, who has been released from prison, tries to comfort Luisa. The two agree to leave the village the next day. As Luisa prays, Rodolfo enters and pours a vial of poison into a glass. He confronts Luisa with the letter. When she cannot deny she wrote it,

Rodolfo asks her to pour him a drink; when he says it tastes bitter, she swallows some too. Rodolfo tells Luisa the cup was poisoned, and she, released from her vow, tells him the truth. She collapses in her father’s arms. When Wurm and Walter arrive, Rodolfo kills Wurm before succumbing to the poison himself.