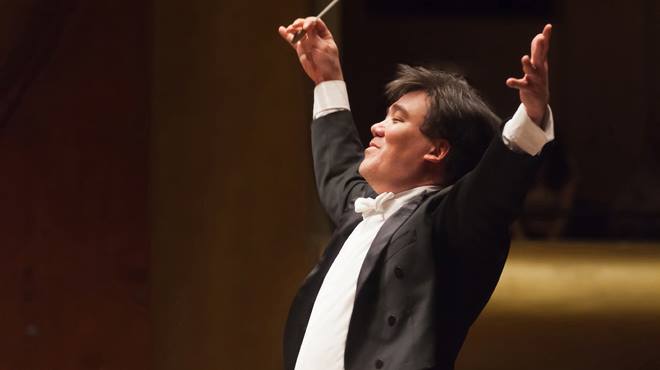 New York Philharmonic Music Director ALAN GILBERT is going all out for his 50th birthday, and you’re invited. Celebrate with this star-studded concert featuring Joshua Bell, Emanuel Ax, Lisa Batiashvili, Yefim Bronfman, Renée Fleming, Frank Huang, and Pamela Frank. “This coming together of kindred spirits and people who love music and who love each other is all you can ask for,” says Alan. 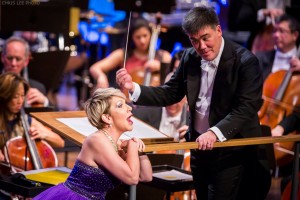 Alan Gilbert was born in New York City. He is the son of two New York Philharmonic violinists, Michael Gilbert and Yoko Takebe, both now retired from the orchestra. Growing up in the Upper West Side of Manhattan, Gilbert attended the Ethical Culture Fieldston School in Riverdale, where he was a top student. As a youth, he learned the violin, viola, and piano. His sister, Jennifer Gilbert, also studied violin, and became a professional violinist.

In the 1980s, Gilbert studied music at Harvard University, where he was music director of the Harvard Bach Society Orchestra in 1988–89.While in Boston, Gilbert also studied with violinist Masuko Ushioda at the New England Conservatory of Music. After obtaining his degree at Harvard, Gilbert studied conducting at the Curtis Institute of Music and the Juilliard School of Music with Otto-Werner Mueller. In 1994, he won the Georg Solti prize, which garnered him a week’s private tutoring with maestro Solti. Also in 1994, Gilbert won first prize at the Inte 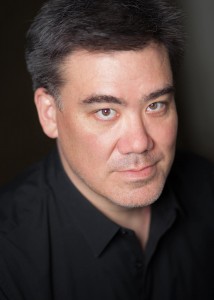 In seven years at the New York Philharmonic, Gilbert has succeeded in transforming the 175-year-old institution into a leader on the cultural landscape. He has led staged productions of Ligeti’s Le Grand Macabre, Janácek’s Cunning Little Vixen, Stravinsky’s Petrushka, and Honegger’s Joan of Arc at the Stake to great acclaim, and encouraged the development of two series devoted to contemporary music: CONTACT!, introduced in 2009, and the NY PHIL BIENNIAL, an exploration of today’s music by a wide range of contemporary and modern composers, which was inaugurated in 2014 and returned in 2016.

Gilbert is Director of Conducting and Orchestral Studies and holds the William Schuman Chair in Musical Studies at the Juilliard School. He made his Metropolitan Opera debut in 2008 conducting John Adams’s Doctor Atomic, the DVD of which received a Grammy Award. He was elected to the American Academy of Arts & Sciences in 2014, honored with the Foreign Policy Association Medal and named an Officier de l’Ordre des Arts et des Lettres by the French government in 2015, and nominated for Emmy Awards for Outstanding Music Direction of two New York Philharmonic productions: Sweeney Todd and a 100th-birthday gala tribute to Frank Sinatra, broadcast on PBS’s Live from Lincoln Center in 2015 and 2016, respectively.

Alan Gilbert on the challenge of new music (Feb. 11, 2016) | Charlie Rose “I think many masterpieces in music, in literature, in visual arts, are ahead of their time. I think anything that is great, by definition, is changing people’s expectations.” Alan Gilbert, the conductor of the New York Philharmonic, explains why appreciating new classical music is so challenging today.

Alan Gilbert conducts Beethoven July 16, 2016  The Music Academy of the West is among the nation’s preeminent summer schools and festivals for gifted young classically trained musicians. At its ocean-side campus in Santa Barbara, the Academy provides these musicians with the opportunity for advanced study and performance under the guidance of internationally renowned faculty artists, guest conductors, and soloists. Admission to the Academy is strictly merit based, and fellows receive full scholarships (tuition, room, and board). The Academy’s distinguished teaching artists roster has included famed soprano Lotte Lehmann, composers Darius Milhaud and Arnold Schoenberg, cellist Gregor Piatigorsky, pianist Jeremy Denk, and current Voice Program Director Marilyn Horne. Academy alumni are members of major symphony orchestras, chamber orchestras, ensembles, opera companies, and university and conservatory faculties throughout the world. Many enjoy careers as prominent solo artists. In 2014 the Music Academy entered into a four-year partnership with the New York Philharmonic, resulting in unprecedented training and performance opportunities for Academy fellows, and Summer Festival residencies for Philharmonic musicians. The Music Academy of the West cultivates discerning, appreciative, and adventurous audiences, presenting more than 200 public events annually, nearly half of them free of charge. These include performances by faculty, visiting artists, and fellows; masterclasses; orchestra and chamber music concerts; and a fully staged opera. The 2016 Summer School and Festival took place from June 13 to August 6 at the Academy’s scenic Miraflores campus and in venues throughout Santa Barbara. For more information, visit musicacademy.org.