ABT. AMERICAN BALLET THEATRE At The Metropolitan Opera. 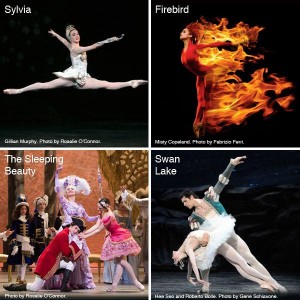 Following a triumphant 75th anniversary season last year, American Ballet Theatre is energized and renewed as we look forward to the next chapter of our illustrious history. Secure your seats today for breathtaking artistry and gravity-defying athleticism from our remarkable roster of world-class dancers who continue to bring fresh and spellbinding performances to these great classics during ABT’s 2016 Spring Season at the Metropolitan Opera House.

ABT honors our visionary Artist in Residence Alexei Ratmansky with a Festival of his adventurous and thought-provoking work:

The Golden Cockerel American Premiere
American audiences will get the first chance to feast their eyes and ears on this exotic ballet, when ABT offers the premiere performances this Spring. With his inimitable style and sensitivity, Ratmansky creates rich characters for the seductive Queen, a marvelously gullible Tsar and the darkly magical cockerel – all set against a kaleidoscope of vibrant color that the entire family will enjoy!

The Sleeping Beauty
The beloved story of the beautiful Princess Aurora, the evil sorceress Carabosse, and the awakening kiss of a handsome prince is certain to cast a spell on your heart and imagination in Alexei Ratmansky’s production, inspired by Léon Bakst’s historic designs for Diaghilev’s Ballets Russes.
BELOVED CLASSICS

La Fille mal gardée Major Revival
Making a welcome return to ABT’s repertoire after more than a decade-long absence, Ashton’s final full-length ballet features beautifully detailed characters and poetic lyricism perfectly suited to its story of young love. In this pastoral comedy, a farmer’s widow is determined to marry her daughter off to a wealthy man’s son rather than to the poor farmer with whom she is head-over-heels smitten. The picture-book countryside setting of maypoles, dancing hens and a miniature pony adds to the bucolic backdrop of this sunny addition to the season.

Sylvia – See Microsite Here
A ravishing fantasy set amid verdant forests and majestic temples, Ashton’s mythological love story unites the huntress Sylvia and a lovelorn shepherd with the divine intervention of the deity Eros. At its heart, Sylvia boasts an incomparable role for its heroine showcasing her dramatic range and astonishing technique, performed against a lushly romantic, rococo setting to a splendid score by Léo Delibes.

Le Corsaire
Discover a treasure trove of virtuoso dancing in this swashbuckling comedy! This exotic fable of a dashing pirate’s love for a beautiful harem girl journeys through a tapestry of captive maidens, rich sultans, suspenseful abductions and dramatic rescues – culminating in a shipwreck that’s one of ballet’s most breathtaking spectacles. Boasting over 120 performers, Le Corsaire perfectly showcases explosive bravura dancing from ABT’s star-studded roster of dancers.